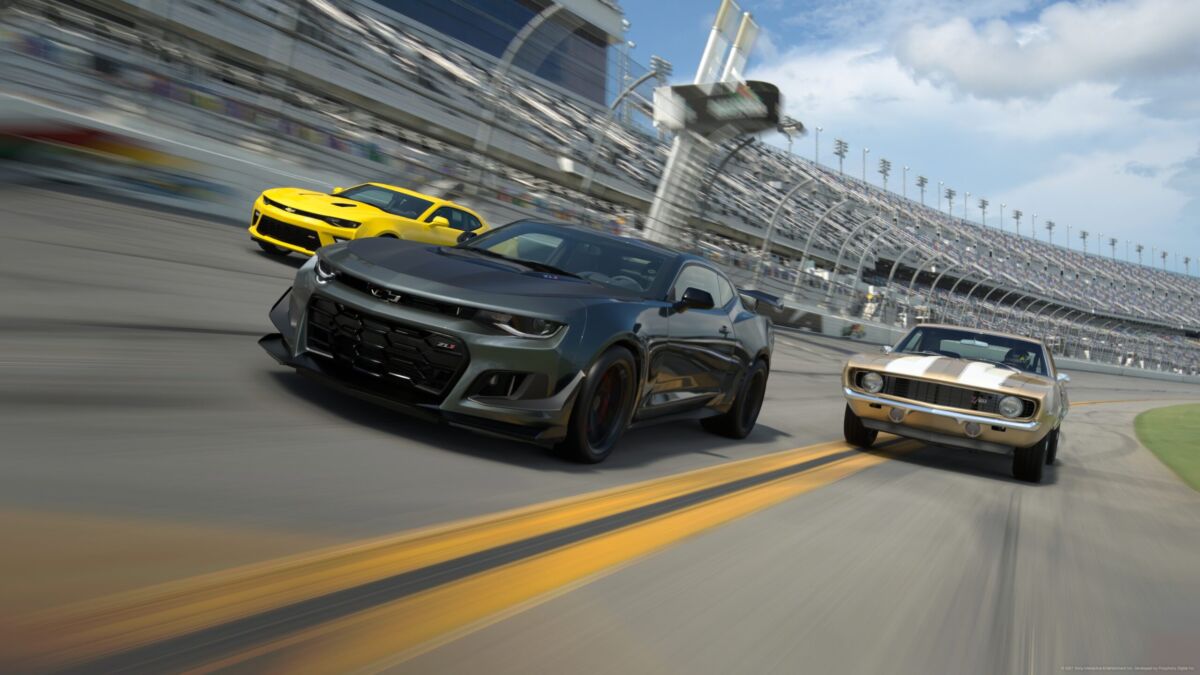 Thanks to its DualSense controller alone, the PS5 seems like the best place to play racing games. Being able to feel the rumble of the car on the track through the controller’s adaptive triggers is something that helps the immersion of any endless racing game. Plus, it makes any impressive drift even more satisfying. However, what are the best PS5 racing games you should play?

For this list, we’re only focusing on games that have been improved in some way for the PS5. While there are plenty of awesome PS4 racing games that are backwards compatible with the PS5, games like Burnout Paradise Remastered haven’t been enhanced for the new hardware. We also omitted Destruction AllStars and Rocket League from this list because they simply aren’t racing games. With that in mind, here are the best racing games available on PS5 that you should know about.

The Hot Wheels toy franchise has been around for decades, so an arcade racing game based on these little toys seems like a no-brainer. Hot Wheels Unleashed is the product of that idea, and if you’re looking for a good arcade racing game experience on your PS5, look no further than this one.

Hot Wheels Unleashed leans heavily on the idea of ​​toys coming to life, as you’ll race on tracks found in a variety of locations. If you’ve ever wanted to see a huge Hot Wheels track spread across a skyscraper or skate park, this game is for you, but you need to make sure to avoid the giant cobwebs shooting at you.

While it might not be the most polished game on this list, Hot Wheels Unleashed is a perfect game for anyone looking for some fast-paced arcade fun or a good racing game for kids to enjoy.

A racing game doesn’t need cars or motorcycles to be a racing game, and Riders Republic pretty much proves that. While you might have to spend your time with the game listening to dudebros throwing grumpy one-liners with reckless abandon, Riders Republic also perfects the art of getting down real fast.

Riders Republic places players in an open-world sandbox based on a hodgepodge of US national parks and tells players to do what they love. What they like might be mountain biking, snowboarding, skiing, wingsuit racing, jetpacks and snowmobiles, because you can progress through the different disciplines as you wish.

When it comes to racing games, Riders Republic is about as diverse as it gets, making it one of the best PS5 racing games money can buy.

Codemasters’ Grid series has always focused on blurring the line between arcade fun and racing simulation, but Grid Legends might be the best fusion between the two the series has yet seen. If you want all the fun of competitive motorsport without getting too bogged down with engine tuning and other petrol-focused features, Grid Legends is worth a look.

With over 100 cars and 130 tracks, including real and street circuits, as well as a story mode called “Driven To Glory”, plenty of fun awaits you at the Grid Legends starting line. Of course, if all those tracks aren’t enough for you, Grid Legends even has a race creator feature, allowing you to create endless amounts of fun.

If nothing else, Grid Legends leans heavily on all aspects of motorsport, so if the idea of ​​semi-truck racing appeals to you, Grid Legends is definitely one of the best racing games out there. PS5.

Although professional motorcycle racing is just as, if not more popular than four-wheel racing like F1, it feels like motorcycle racing games just don’t get the same level of exposure and respect than other racing games. Still, if you want a brilliant depiction of racing on two wheels, MotoGP 21 is the game for you.

An officially licensed racing game for the MotoGP championship, MotoGP 21 is a grand celebration of the sport, both historically and in its current form. The game includes the full 2021 season, with all licensed riders, teams and tracks for MotoGP, Moto2 and Moto3, plus a full suite of legendary riders and bikes for those who like to reminisce about the good old days.

Although it might not have as many wheels as the rest of the competition on this list, MotoGP 21 is still one of the best PS5 racing games you can play.

While Art of Rally might stand out among a list filled with high-res graphics and realistic depictions of racing, it’s nonetheless worthy of a spot on this list. In fact, while it’s an exciting and thrilling game to play, there’s a serene quality to Art of Rally’s lo-fi aesthetic, which makes it as peaceful as it is brilliant.

A love letter to the sport of rallying and its history, Art of Rally is a beautiful depiction of cars speeding through the dirt. Focusing on the “golden age” of rallying between the 60s and 80s, Art of Rally recreates many of the vintage cars you’d expect from that era, and has players traveling all over the world through 70 different stages.

Of course, if that sounds a little too exciting, there’s always free roam mode, which lets you explore and find collectibles at your own pace. If you’re looking for a relaxing racing game that feels like you’re racing against the road, Art of Rally is one of the best PS5 racing games you can buy.

From rally homages to officially licensed merchandise, WRC 10 continues the series’ long tradition of delivering the best possible rally experience. If you’re even a passing fan of the sport of rallying, WRC 10 is the game for you, and even if you’re not, it’s still fun to just drag cars around the countryside without consequences.

The official video game of the 2021 World Rally Championship, WRC 10, includes the 12 stages of the season of the year, as well as all the cars and the sponsors that accompany it. On top of that, WRC 10 coincides with the WRC’s 50th anniversary, which means there are plenty of historic Group B cars for players to enjoy too.

If traveling the world and competing at the highest level of rallying sounds like a great time, WRC 10 is the game for you.

Not all of the best racing games on the PlayStation 5 have to be clean, respectful racing where no one gets their paint scratched, so it’s great that games like Wreckfest exist that focus on the destructive elements of racing to do for a wonderful racing experience. If you like racing dirty and ramming your competition into the nearest wall, Wrestfest should be right up your alley.

As a destruction derby racer, you’ll race your way through various championships, earning new cars and upgrades along the way. Some championships will see you smash cars on classic figure-eight or oval tracks, while others will place you in arenas as a school bus and task you with pulling out a fleet of lawn mowers.

Just because Wreckfest doesn’t take itself too seriously doesn’t mean it shouldn’t be considered one of the best PS5 racing games you can buy.

Codemasters’ Dirt series has been around for quite a while now. While some might prefer Dirt Rally, which focuses on pure rallying, the mainline Dirt series is more concerned with off-road driving fun. Dirt 5 turns this number up to 11, proving to be the best entry in the entire series with a few key improvements.

Career mode is more involved than most, pitting the player character against a rival voiced by Nolan North, while your mentor is voiced by Troy Baker. Good voice acting doesn’t make racing games great, so thankfully a healthy selection of modes and tracks from around the world helps ensure there’s always something new and interesting around the corner.

Of course, if the pre-made events aren’t enough for you, you can always go online and download one of the thousands of player-created events, which means endless amounts of fun.

If the Netflix documentary series Drive To Survive is anything to go by, Formula 1 is a hotbed of drama on and off the track, but F1 2021 is the first game to truly capture that side of F1. With Braking Point’s story mode, you experience a tale told from multiple angles about a team struggling to come together as they face internal and external pressures.

If story mode isn’t your bag, F1 2021 is still a huge improvement in gameplay over previous games in the series. F1 fans will appreciate the sharper visual presentation, while those looking for a multiplayer racing game experience will appreciate that you can play two-player career mode, either as rivals or even as teammates.

F1 2021 might be a tough sell for those not sold on the real-life championship, but it’s still one of the best racing games available on PS5.

Sony’s flagship racing game series, there couldn’t be any other top spot on the best PS5 racing games than Gran Turismo 7. While that might be a bit too sim-heavy for some, there’s still a ton of accessibility there for those craving some laid back racing thrills. You could also get a history lesson on Japanese hatchbacks, but that’s neither here nor there.

With brilliant gameplay, excellent graphics, and plenty of content to chew on, Gran Turismo 7 is the best racing game on PS5.

Some of the coverage you find on Cultured Vultures contains affiliate links, which provide us with small commissions based on purchases made while visiting our site. We cover gaming news, movie reviews, wrestling and more.