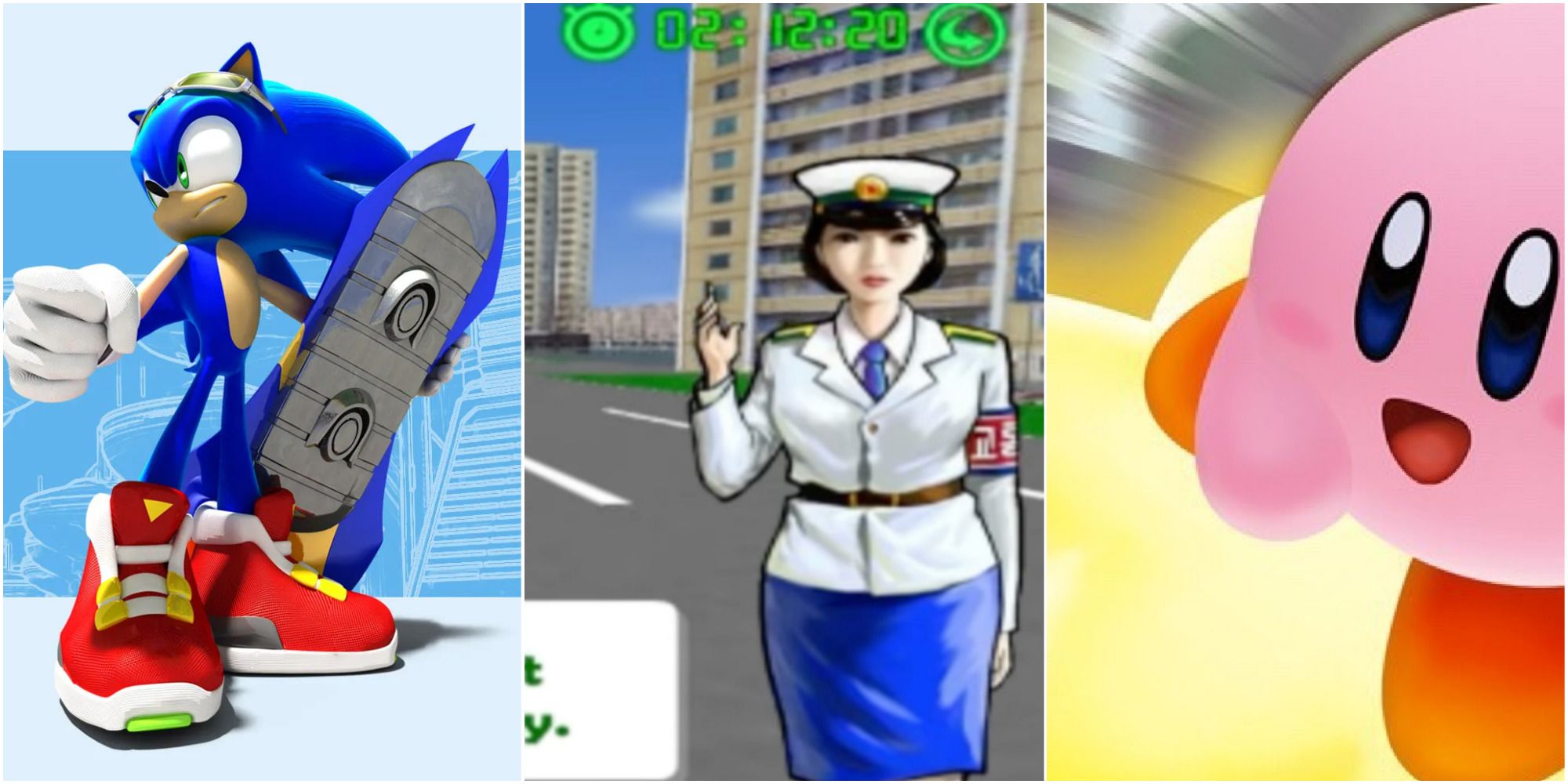 10 Weirdest Racing Games Ever Made

At first glance, racing games seem pretty simple: drive a car, go fast, win. But while most games in the genre are content with this simple formula, more or less a few weapons or a boost mechanic, some developers take the basic skeleton of a racing game and decide to go in a stranger direction. .

Maybe instead of cars, you drive a special vehicle with a unique control system, or no vehicle at all; or maybe instead of a person driving a car, you’re a bear (seriously). Or maybe you’re an anime girl instead of a car (no, seriously). Whatever the concept, the one thing these games all have in common is that they’re a bit quirky.

Sonic is a natural fit for the racing genre – his whole character is literally “going fast”. But much like its core games, Sega has gone in a lot of… unorthodox directions when designing racing games around it. Sonic R, the only 3D Sonic game for the Saturn, is a good example.

Instead of Sonic and his friends driving cars, the game’s racing takes place on foot, and each track is designed to be explored more than it’s designed to be driven. It hasn’t exactly aged gracefully, but Sonic R’s unique ideas and impressive soundtrack are definitely memorable.

GAME VIDEO OF THE DAY

I’m playing fast and loose with the definition of “racing game” for this one, but it’s so offbeat I have to include it. Drive Girls is a PS Vita exclusive where you play as a group of different anime girls who can all transform into modern cars. Suffice to say, it’s more than a little confusing to watch a soft-spoken blonde warrior in skimpy cybernetic armor transform into a shiny Honda sedan.

The gameplay is really more action-oriented than racing, letting you battle waves of enemies in car and girl form. Why do you need to transform into a car to do this, you ask? Well why not?

Kirby’s Air Ride is proof that “weird” doesn’t necessarily mean “bad.” You play as Kirby (Kirbys of different colors in multiplayer), racing on fancy and colorful tracks. But rather than controlling your acceleration, the game automatically pushes you forward, and you use the A button to brake, drift, charge a boost, inhale enemies, and use copy abilities.

Which function the button performs changes depending on the context. It’s certainly an unusual design for a racing game, but its simplicity is appealing, and with its variety of modes (including the beloved City Trial), Kirby’s Air Ride has become a cult classic.

One of the few video games developed in North Korea, Pyongyang Racer is quite simple. It was designed by the software company Nosotek as an advertisement for the tourism industry in Pyongyang, the capital of North Korea; since it was designed to be played in a web browser, it is logical that it is not really complete.

All you do is drive through a flat rendering of the streets of Pyongyang, trying to collect information about the city’s landmarks while a traffic cop scolds you if you’re driving incorrectly. If made elsewhere, it wouldn’t be particularly noteworthy – but since Pyongyang Racer is a rare North Korean medium to leave the country, the game is an oddly valuable cultural artifact.

In the 90s, Squaresoft was one of the most successful video game developers, exploiting the technological leap to 3D to create iconic and indelible games. Their success also meant they could get a little weird, with games like Parasite Eve introducing new levels of complexity and genre-blending style.

Every winter, I think about how I’d rather be a bear – full of food, safe and warm in a cave, and asleep. Enviro-Bear 2000, however, reinvents that comforting fantasy into a stressful experimental racer. You play as a bear driving a car through a forest, looking for food to get through the coming winter.

However, you only control the bear’s paw, which makes driving and feeding at the same time a difficult task. You’ll also have to dodge bees, badgers, and other angry cars in your quest to get bigger. I think I’ll stay human, thank you.

The Wii was full of weird experiences, as Nintendo and the rest of the industry scrambled to figure out how to tap into the console’s broad appeal. One of Nintendo’s first goofy moves was to bring back the classic Excitebike series as Excitea truckan arcade offroad racing game.

Then they followed with Excitebots, which replaced monster trucks with, uh… (checks notes) robot animals that transform into karts and do tricks in the air. Alright, of course. The game is surprisingly fun, but its concept is so absurd it borders on parody.

Driver: San Francisco is best known these days for not being available on digital storefronts, but this quirky open-world racer deserves to be known for its bonkers concept.

When you participate in different races in a fictionalized version of the San Francisco Bay Area, you can astral project yourself out of your car and into other vehicles, such as city buses or taxis. This allows you to use the surrounding traffic to influence a race to your advantage, like some kind of driving god.

This is the second ad game on this list, which goes to show that no idea is too weird for capitalism to turn into advertising. In the 2000s, Burger King decided it would be a good idea to develop a series of inexpensive Xbox 360 games to advertise the brand; PocketBike Racer is one of them.

You can play as Burger King icons like The King himself or, uh, a burger, and race through suburban neighborhoods on tiny bikes. There are only five tracks and the gameplay isn’t much, but the unique experience of playing as a giant burger on a tiny bike makes this unlike any other racer.

Like Sonic R, Sonic Riders is an unorthodox Sonic racing game full of interesting ideas and marred by messy execution. Where Sonic R brought the speed and exploration of Sonic’s side-scrolling platformers to a 3D racer, Sonic Riders drops the hedgehog and his friends on hoverboards, with a whole set of intricate, interlocking mechanics.

You have tricks, drifting, drawing, air management (essentially gasoline), different paths through courses based on character type, one of the weirdest start mechanics in racing games, and more. Do you still have vertigo? Sonic Riders isn’t the most accessible racing game ever made, but I used up my Wavebird’s controller at the time, so there’s definitely something appealing about it.

Leah Isobel is a California-based writer, critic, musician, and actress. His work has been published in Singles Jukebox and Soap Ear Journal. She has been playing video games since the age of four and has a particular fondness for RPGs, platformers and adventure games. You can usually find her in a kitchen somewhere baking pies.