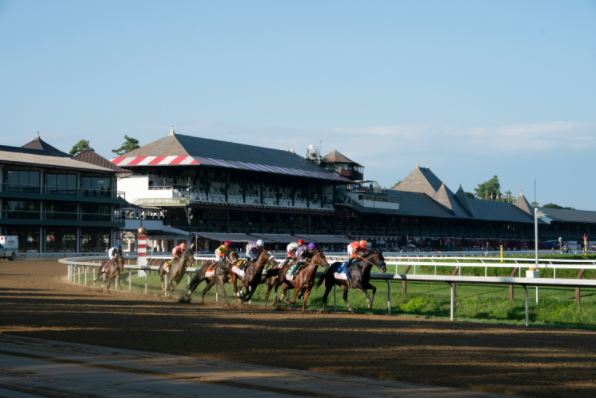 My oldest teenage son is an eclectic movie buff. While he enjoys current mainstream movies, he has fondness for some of the classics and obscure directors. One evening at a family dinner I said I was interested in finding obscure horse racing movies. A day later, my son had produced a list that I found fascinating.

A few years ago I presented the best horse racing movies for a rainy day. Although great movies, they are all popular. The following films are all worth watching and I think you will be pleasantly surprised with the selections.

Director Brian De Palma is not known for comedies. He will forever be known for making classics like Carrie, Scarface, Mission: Impossible, and The Untouchables. This predictable comedy is however saved by the set of actors including Danny DeVito, Joe Piscopo, Harvey Keitel, Dan Hedaya and Frank Vincent.

It might be more sentimental for me and my track buddy Walter, but some early scenes were shot in the old Meadowlands grandstand. The basic premise of the story is that two little gangsters (DeVito and Piscopo) both place a bet for the mob leader on a fixed run at the Meadows. The two agree to kill each other and hilarity ensues.

Abbott and Costello’s comedic duo never disappoints with laughter. Pair this comedic duo with one of my favorite screenwriters, Damon Runyon, and you’ve got the recipe for success. Runyon was known for his mix of formal speech and slang with his characters who had colorful names instead of formal names.

How do most degenerates start? They bet two dollars and win a few dollars. The game seems easy at this point, and they keep betting, only to find that short term success doesn’t translate into long term.

In this film noir, the same things happen to banker John Hewitt. He wins this first bet and is hooked. Before he realizes it, he’s wiped out his savings and starts withdrawing money from the bank. He is then told that his bookmaker has one sure thing, and that he can participate for $ 20,000. He is fooled by the money and takes matters into his own hands. He ends up killing the two bookie middlemen and her boyfriend, but is fatally injured in the process.

Barbara Billingsley who would later become known for her role as June Cleaver in Leave it to the beaver and Carl Switzer who was known for his role as alfalfa on the Little rascals both add to the cast.

With the slogan “I bet! I fly! I killed! “How can it not be good? How far would you go not only to win, but also to break even on the track?

This movie could easily be called Australia’s Seabiscuit. It’s similar in the sense that a horse that no one wanted is brought down to the stakes level and then no one could beat. It is based on a true story and was shot with an Australian cast.

Phar Lap’s legacy on the track is only eclipsed by his untimely death. In fact, the American version of this film cuts the opening scene of the dying horse before returning when it arrives in Australia, until the end of the film because Americans did not know its history.

Another interesting note is that Phar Lap’s groom and later trainer Tommy Woodcock has a horse trainer role in the film.

I saved the best for last. In what would be a storied career, this would be Stanley Kubrick’s first major film. Although best known for blockbusters like Spartacus, Dr. Strangelove, A Clockwork Orange, The Shining, and Eyes wide closed, this noir film does not disappoint. In fact, Quentin Tarantino even said that The slaughter influenced him in his production of Reservoir dogs.

For the 1950s, the successful heist of stealing $ 2 million from a racetrack in a speedboat race rivals the success of the Lufthansa heist described in Goodfellas. Everything would have gone as planned if the crooked cashier could have kept his mouth shut instead of telling his wife the plan. Ultimately, mastermind Johnny Clay tries to escape but his attempt is thwarted by a dog obstructing the luggage cart. In the end, he realizes that running is futile and mumbles the last line of the movement: “What’s the difference? As his wife urges him to run.

So take a break to try to make a living playing races, bake popcorn, and settle in to the best horse racing movies you’ve never heard of. I bet you will be pleasantly surprised.

Ray Wallin is a licensed civil engineer and part-time handicapper who has been on the web since 2000 for various sports and horse racing websites and through his personal blog. Introduced to the sport during a poorly spent teenage summer at Monmouth Park by his uncle Dutch, a professional player, he quickly fell in love with running and disabled for over 25 years.

Ray likes to focus on rhythm and angle play while balancing the art and science of disability. When not crunching the numbers, Ray enjoys spending time with his family, cheering on his alma mater (Rutgers University), fishing and golfing.

Ray’s blog, which focuses on his quest to make it to the NHC Finals while trying to improve his handicap skills, is available at www.jerseycapper.blogspot.com Ray can also be found on Twitter (@ rayw76) and can be contacted by email at [email protected]