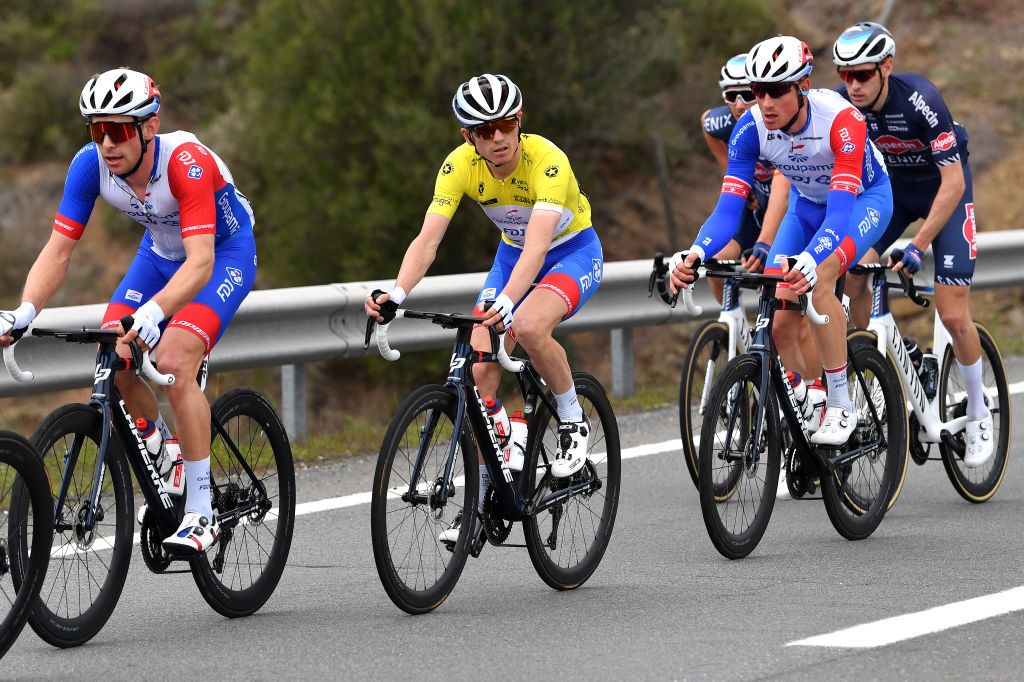 Gaudu: I know I won’t keep the yellow jersey at the Volta ao Algarve

David Gaudu (Groupama-FDJ) knows that his grip on the yellow jersey at the Volta ao Algarve after winning stage 2 on the Alto da Fóia is temporary.

A shadow over twenty miles separates the start and finish of Saturday’s stage 4 time trial, and a single second separates the Frenchman in the general classification from riders like Brandon McNulty (UAE Team Emirates) and Remco Evenepoel ( QuickStep-AlphaVinyl). Something has to give.

“I will have the yellow jersey on my back for the time trial, but I know I won’t keep it,” admitted Gaudu as he took his place near the podium in Faro on Friday afternoon. “I’m only a second ahead, so if I keep it, it would be a bit of a feat. But I’ll still be looking to enjoy the day.”

There are, one imagines, nicer ways to enjoy an afternoon on the Algarve coast, but Gaudu will be looking to track his progress against the clock on the road to Tavira with a view to testing later in the season. year, especially the 40 kilometres. time trial of the penultimate day of the Tour de France.

The Breton, who ranked 13th overall in 2021, should this year line up as part of the triumvirate with Thibaut Pinot and newcomer Michael Storer.

“I’ve worked a lot on my time trial over the last few months since I got back to training,” Gaudua said. “I can’t wait to see how it goes on Saturday. I can’t say now if I’m going to lose a minute, or a minute and thirty seconds, or two minutes. I really don’t know.

“I’m just going to try and do a regular time trial and show that I’ve made progress in my position. The loss of time will be almost incidental, so to speak, as long as I’m happy with my own time trial. show.”

Gaudu’s team-mate Stefan Küng, so impressive in claiming his stage win at Alto da Fóia on Thursday, is perhaps the favorite to win the time trial in Tavira on Saturday. Regardless of limiting his losses enough to stay in the hunt for overall victory, Gaudu will have another chance to shine in Sunday’s final summit finish at Alto do Malhão.

“The race is already a success with the stage win,” Gaudu said. “And the last leg suits me a little better than [Alto da Fóia.] For the GC, it will undoubtedly be difficult, but we will see. I’m just going to try to do the best possible time trial to show the work I’ve done this winter.”

Gaudu took the lead in the general classification thanks to this victory at the Alto da Fóia summit on Thursday, when he launched a raspy sprint to claim the summit ahead of Samuele Battistella (Astana-Qazaqstan) and Ethan Hayter (Ineos Grenadiers).

Evenepoel, whose victory pose from two years ago is now captured in a statue near the finish line, was favored to deliver another show of force in the Serra de Monchique, but it’s Gaudu instead which produced the decisive acceleration.

“The sprint was a lactic effort, and I thought about all the effort I did like that in the last training camp,” said Gaudu, who picked up a victory in February for the second time in as many seasons after winning the Faun-Ardèche Classic last year.

“For mid-February, my form is good. The objective was not necessarily to win here, but to be good for Paris-Nice, because I want to do well there.”