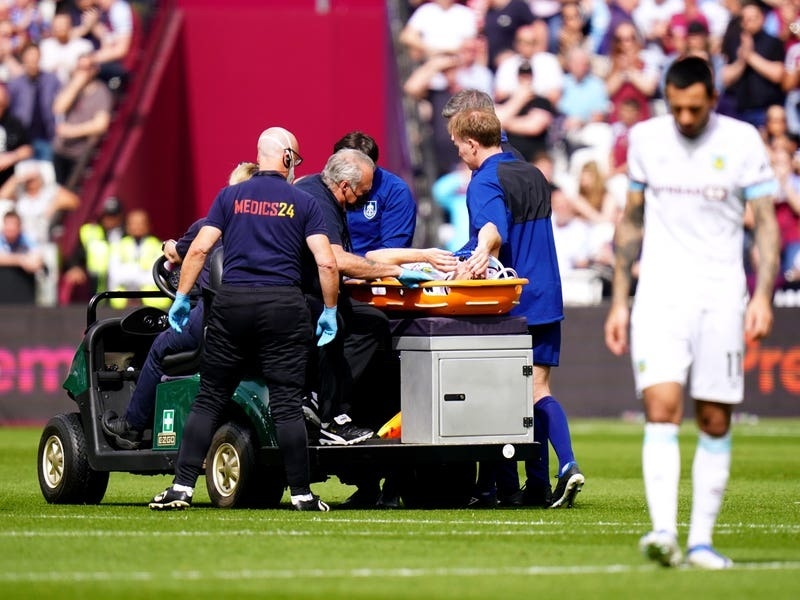 Burnley midfielder Ashley Westwood is facing a long stretch after suffering a horrific injury that has left some West Ham players on the verge of tears.

The 32-year-old suffered a suspected dislocation and fractured ankle in the 1-1 draw at the London Stadium after an innocuous challenge with Hammers striker Nikola Vlasic.

Declan Rice quickly alerted medics, while Vlasic and Aaron Cresswell looked distraught upon realizing the severity of the injury.

Interim Clarets boss Mike Jackson said: “He has gone to hospital and we are awaiting an update. We hope he is well, our thoughts are with him.

“You could see it wasn’t good from the reaction of the players. He looked distraught, but fingers crossed we hope he’s okay.

“When you see Declan Rice come up and say it’s no good, you know it’s not. The boy himself raised his hand and he usually doesn’t come down.

“It could be the end of his season, but there is a team here ready to play. Josh Brownhill came in and did very well. They reacted well from that, it’s a good group.

Burnley tweeted on Sunday evening that Westwood was “well and with the club doctor and will be assessed by a specialist in the coming days”.

The shocking injury marred a fighting display for the Clarets, who took the lead through a Wout Weghorst header moments after Westwood left.

But Maxwel Cornet missed a penalty to double the lead in first-half stoppage time and instead they were caught by Tomas Soucek’s 74th-minute slugging in.

In fact, Burnley hung on at the end, with goalkeeper Nick Pope twice denying Michail Antonio and pulling off a superb save to deny Issa Diop’s header.

Jackson, the club’s Under-23 coach, said he was still in the dark about Burnley’s search for a new manager following the shock departure of Sean Dyche.

“I haven’t looked any further than today,” he added. “But I’ve seen a lot of things from this group, I know how they are. Sometimes you need a bit of a foundation to build on and hopefully that comes from today.

“Everyone has pulled together. We’ll have a recovery day tomorrow and go from there. But now I’m thinking about getting on the bus and going home.

David Moyes was frustrated after West Ham, on the heels of their Europa League exploits at Lyon, failed to take full advantage of Saturday’s defeats to Tottenham and Arsenal in the top four race.

The Hammers manager said: “It was a great opportunity for us today and we didn’t take it.

“Before the injury, we had a bit of rhythm and we were the better team. But that still got us out of there.

“We gave a free kick and then a corner from which they scored. It was not very good from us. Will it be a good point at the end of the season? No.”