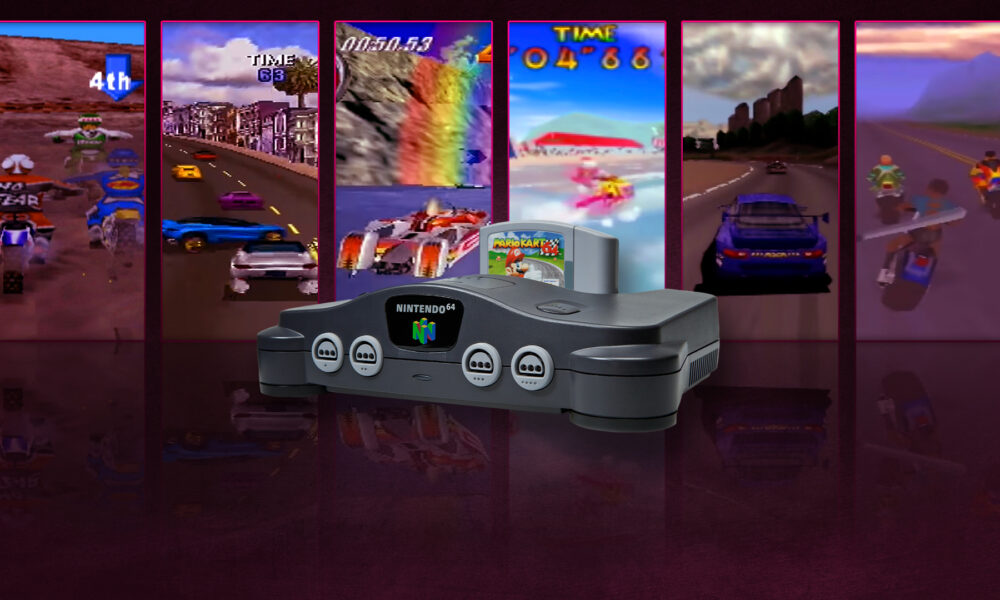 
With Mario Karo 64 and F-Zero X now on the Nintendo Switch, via Online + Expansion Pass, these are the N64 games we’d like to see join them.

Nintendo’s online membership has given us some NES and SNES classics for some time now, but the recent second tier – the ‘Expansion Pack’ – also opened Mega Drive and N64 titles.

Initially let down by flawed emulation (who knew so many people cared so much about Zelda’s fogging?!), a recent update has made the service much more authentic and improved input latency as well.

And what does better input latency mean? Racing games are much more likely to play well on the service. We already have some great Mario Kart 64 and F-Zero X releases, but what other titles from the N64’s vintage library would be ripe for conversion to the service?

Well, without nostalgia glasses obscuring my vision (I was, after all, a Sega kid), here’s a list of titles that are still worth playing today.

Wave Race 64 remains a fine example of blue sky gaming. Every new console generation has a game that shows off its water effects, but Wave Race 64 is so good it wasn’t even bettered by its Gamecube sequel.

You really dive into this water as your Jet Ski cruises over huge dynamic waves. A lazy pre-race presentation and incidental flourishes like dolphins leaping through the water add to the charm so that Wave Race 64 stands the test of time better than many 3D games from the same era.

That said, the frame rate isn’t all that high and blurry visuals might put off today’s modern gamers, but both of these could so easily be fixed in an emulated Switch port. Given that the franchise is entirely owned by Nintendo, it’s very likely that this will appear at some point in the not-too-distant future.

The original Extreme G offered a kind of two-wheeled version of Wipeout, but it’s pretty basic by today’s standards. However, its first sequel clearly laid the foundation for our favorite of the series, namely the PS2-era Xtreme G III.

Xtreme G II on N64 has a lot to offer with bold visuals, exciting track design with loops, jump ramps, inclines and forks in the road, mixed with a healthy dose of speed. The lighting is still nice when zooming into the low-poly environments, but it’s mostly the gameplay density that holds up today.

There’s always something to do, and that’s the central twitch reaction, which would benefit from Switch’s tighter controls over the N64’s rather loose analog stick. Again, smoothing the graphical edges of this on Switch would be welcome, but either way, it would suit the console just fine in handheld gaming.

The fact that the Ridge Racer series hasn’t had a proper entry for a decade at this point is one of gaming’s most heinous crimes. But the existing catalog is split into two distinct gameplay types: the original versions which favored racing lines and back bends, and drift/boost focused RR6/7 versions and portable versions.

The N64 version represents one of the most elegant realizations of the original gameplay, with this classic seaside route through the tunnel of the arcade game, above the… well, the Crete, and along the coast.

Things deviate quickly from the expected basic arcade conversion, with new cars that are much faster and some really fun tracks with some rather silly jumps at times. The emulated versions look great, which bodes well for that…provided Namco is happy to accept the license, of course. We live in hope.

This one is often overlooked when talking about N64 games, but it’s aged very well. Where modern motocross games have massively unforgiving physics, this game prefers playability, which makes it much more fun for a beginner to play, although there are still plenty of crashes to endure if you’re not careful. .

Also, despite its low polygon count, the game still looks good thanks to a smooth frame rate and the fact that the stadium stands are never removed, which rather limits the appeal of closer landscapes. . It’s a nifty trick, leaving the screen always full of smoothly scaling polygonal 3D.

The track’s design quickly moves beyond the confines of its stadium and also incorporates outdoor and industrial environments, with concrete pipes to pass under and steel beams to climb. It’s remarkably complex and still rooted in that wonderful ‘solid’ feel that N64 games often have.

Cruis’n USA and its sequels

The Switch received a surprisingly impressive Cruis’n sequel last year with Cruisn’ Blast, but if you look back at the series with its three N64 installments, you can see recent gaming DNA most certainly present in Cruis’n. Exotica.

With faster action than most N64 titles, but still with pleasingly solid 3D and decent draw distance, it’s one of the arcadier racers you’ll find without the word “Sega” written on it. But is Exotica the one we want on Switch Online?

Probably yes, because there’s more to it than the original Nintendo/Midway coin-op conversion. But that said, it was Cruisn’ USA that first came to the Wii’s Virtual Console, and in terms of company history, it was that game that took on Daytona USA in the arcades in the early days. 90s, so we’ll probably see that first. Fingers crossed all three do it at some point because they all have merit.

Another series that badly needs a new entry, Road Rash managed to go fully 3D after its 16-bit heyday and did so on N64.

Looking at it now, this game does a lot of things right. There are still rolling hills and wide roads, and maneuvering around your rivals before hitting them in the face with a piece of piping is arguably more manageable than on Mega Drive, even if the racers don’t visibly react like you. you expected the rather extreme assault there.

It would be so great for a new generation of gamers to experience Road Rash via Switch, although Road Rash II would be a better way to do it.

The N64 doesn’t have many serious racers in its library, especially not many who have dared to challenge Sony’s Gran Turismo at its own game.

But this one had an incredibly decent stab. Indeed, the smooth, solid graphics paired with an expansive career mode – which uses a dozen slots in different layouts – means there’s a lot more to this one than you might expect.

Given an HD facelift via Switch Emulation, this would still be a perfectly usable portable racer, no doubt better than a lot of dross on the eShop at the moment. His cars are also unlicensed, which would certainly work in his favor to get a re-release in 2022.

However, it came out late in the N64’s life, so whether it has enough fans or garnered enough attention to warrant the effort is another matter, but for me, I would still love to play it on Switch.

One of the best Dreamcast launch games got a decent conversion to N64 as well. The powerboat gameplay is super fun, with time-limited turbo boost pickups littering the tracks.

There are massive leaps, a sort of “hop” motion that lets you momentarily leave the water into shortcuts and a wry sense of humor.

The final level is a stopper, but the whole game is packed full of classic, uninterrupted Midway arcade action that deserves another chance to shine, especially since its gameplay remains as fresh today as it does today. has ever been.

And finally, how about some great Micro Machines action? Based on Micro Machines V3 on PlayStation, this N64 “Turbo” version fixes the biggest flaw in Sony’s offering by dramatically smoothing out the frame rate.

The result is a fast and enjoyable racer, although it would need a track map, as the zoomed action makes viewing the turns ahead quite difficult.

Still, the multiplayer action would be fine on the Switch, especially since the eight-player split pad mode could theoretically be done with eight JoyCons (still recognized as four shared controllers), and some less blurry visuals would be a bonus.

Micro Machines just hasn’t been done right for so long, but it’s one of the best releases.

You might be wondering why Diddy Kong Racing isn’t on this list. Well, that’s because we’re giving this game its own retrospective article, so rather than reading it twice, you can just do Diddy justice by reading this this time next week.

In the meantime, let us know what you think would be useful to bring to the service in the comments below.