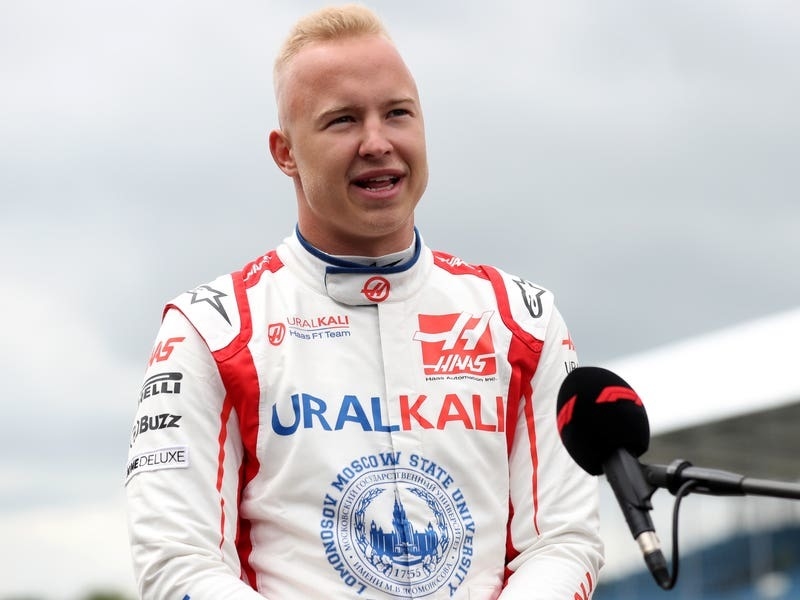 Russian Formula 1 driver Nikita Mazepin has been sacked by Haas with immediate effect.

Mazepin’s contract was terminated by the American team following the Russian invasion of Ukraine.

His father, oligarch Dmitry Mazepin, is a co-owner of Haas’ title sponsor Uralkali and an associate of Russian President Vladimir Putin. Haas has confirmed that its partnership with Uralkali has also been terminated.

“Like the rest of the Formula 1 community, the team is shocked and saddened by the invasion of Ukraine and wishes a speedy and peaceful end to the conflict.”

The FIA ​​allowed the Russian drivers to continue racing, but under a neutral flag.

But the sporting federation said on Friday that all drivers must accept its principles of peace and neutrality and “recognize the strong commitment made by the FIA ​​to stand in solidarity with the people of Ukraine, the Automobile Federation of Ukraine and all those suffering due to the ongoing conflict.

“Dear fans and followers, I am very disappointed to learn that my F1 contract has been terminated,” Mazepin wrote on Twitter.

“While I understand the difficulties, the FIA’s decision as well as my continued willingness to accept the proposed terms to continue were completely ignored and no process was followed in this unilateral step.

“To those who tried to understand, my eternal thanks. I treasured my time in F1 and sincerely hope we can all be together again in better times. I will have more to say in the next few days.

Formula 1 also ended its contract with the Russian Grand Prix on Thursday, while Motorsport UK announced that Russian-licensed drivers will be banned from racing in the UK.

Haas said Mazepin’s replacement will be named next week. The team’s reserve driver Pietro Fittipaldi, grandson of two-time world champion Emerson Fittipaldi, has been linked to the seat.

The final three-day pre-season test begins in Bahrain on Thursday ahead of the opening round in the Gulf Kingdom on March 20.

In another Ukraine-related case, China is to block coverage of this weekend’s Premier League matches, according to the PA news agency.

The competition and its clubs have expressed their intention to show solidarity with Ukraine in various ways throughout the 10-match program and Chinese rights holder iQIYI Sports has responded by refusing to show the matches.

The Premier League declined to comment on a decision that was interpreted as a sign of China’s strong relationship with Russia.

Regarding the Premier League’s TV deal in Russia, chief executive Richard Masters told the Financial Times Business of Football Summit this week that the deal was “under review”. It could be suspended or terminated soon, although games are likely to be shown this weekend.

Meanwhile, International Paralympic Committee (IPC) President Andrew Parsons used his speech at the opening of the Paralympic Winter Games in Beijing to issue an impassioned plea for peace.

The Games began on Saturday, 48 hours after the IPC made a U-turn to exclude Russian and Belarusian athletes from competition rather than allowing them to participate as neutrals.

“Tonight I want and must start with a message of peace,” Parsons said during the official opening of the Paralympic Games on Friday at Bird’s Nest Stadium.

“As the leader of an organization focused on inclusion, where diversity is celebrated and differences are embraced, I am horrified by what is happening in the world right now.

“The 21st century is a time of dialogue and diplomacy, not of war and hatred.

“The Olympic truce for peace during the Olympic and Paralympic Games is a UN resolution. It must be respected and observed, not violated.

Despite the war in their home country, Ukraine managed to send a full delegation of 20 athletes and nine guides to Beijing.

And the team won a medal on day one with biathlete Taras Rad taking silver behind China’s Zixu Liu.

2022-03-05
Previous Post: From stylish arcades to the Riptide GP series: the best Android racing games will be available in 2022
Next Post: Featured: Gran Turismo 7 is a forerunner among racing games, Digital News