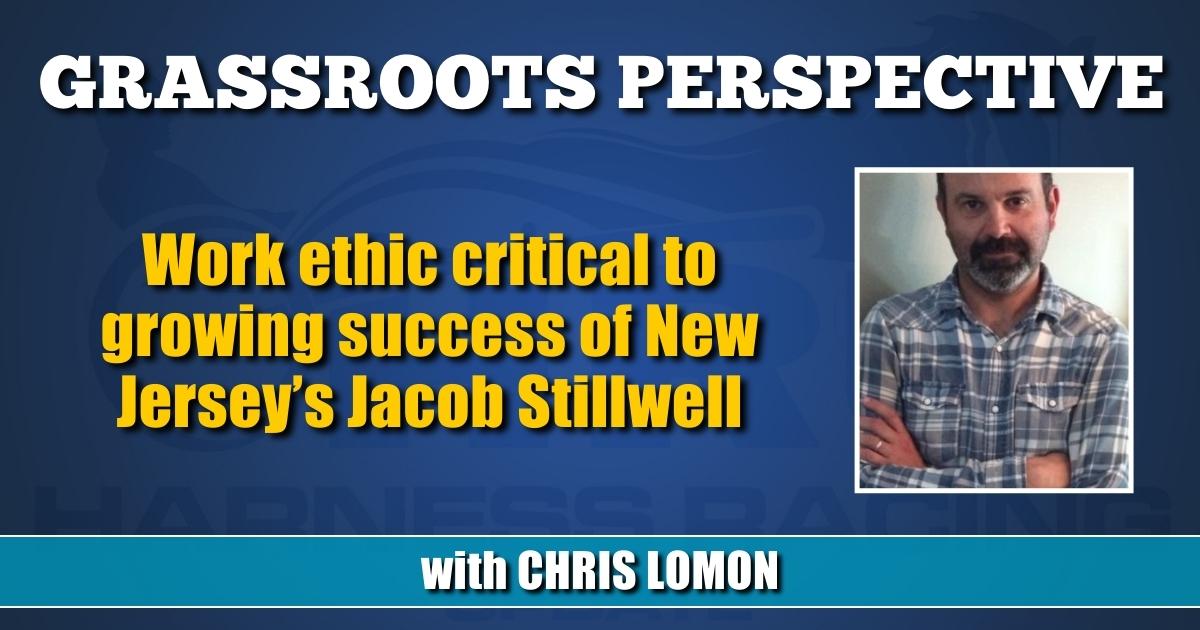 He was describing a veteran trotter, but Jacob Stillwell could very well have been speaking for himself.

Dark Pool, a 9-year-old son of Cantab Hall, has traveled far more miles than the 22-year-old driver/coach from Jackson, a township in Ocean County, NJ.

But despite their difference in track experience, the bay with 166 career starts, including 33 wins, and the rising star who has 180 starts combined, share one thing in common.

When it comes to work ethic, the duo share an undeniable bond.

“He’s taught me a lot and he’s a really fun horse to ride,” said Stillwell. “He fought until the end and never gave up. He is a hard worker who shows up every time.

Although his family tree is rooted in horse racing, Stillwell didn’t branch out and feel a connection to the sport until his senior year of elementary school.

But when he found out, Stillwell was hooked from the start.

So much so, in fact, that his professional vocation became clear shortly after these first experiences.

In 2020, he launched the driving side of his racing life, making three starts and earning a second-place finish.

The following year, Stillwell added coaching to his repertoire. In 40 starts, he won seven races, with seven seconds and four thirds.

This season included a pair of treasured milestones.

“It was a rush,” he said of his first driving win on Jan. 21, 2021. “I was in Yonkers and rode Dark Pool, my uncle’s horse. We’re left and just followed the peloton and at half time I pulled him and he did the rest. I was just a passenger for him. We ended up winning by four lengths. It was so nice. It was during the pandemic, so at Yonkers they didn’t have the winner’s circle at that time. It was just me and my uncle. But it was still amazing, so exciting.

This time, however, was a perfect moment.

“My first win in training came at Freehold with a mare I still call Iron Mistress. Everyone was in the winner’s circle that day. She ran so well for me that day. I didn’t drive, but my cousin, Vinnie Ginsburg, did. It was pretty cool to see one of my horses there and win a race under my name. It was great that my cousin gave me my first victory in training.

Stillwell hasn’t slowed down since then, adding more wins to both sides of his stat sheet.

Despite the successes, he remains motivated when it comes to his dual role in horse racing.

“When it comes to riding, it’s about knowing all about each horse you’re sitting behind, learning different mannerisms and skills to help bring out the best in them. With practice, again it’s about learning what motivates each horse, making sure you send them 100% ready to go I love seeing their faces every morning, walking into the barn and see you waiting. Everyone is different and everyone is special.

Currently, Stillwell has six horses in his barn.

For now, this number is a perfect fit. But he would like to see that number increase in the near future.

“One day, I would like to have more horses and more victories. My goal with riding is to keep learning and improving. My long term goal would be to get out and drive with the pros one day and become a regular somewhere. By training, I want to get more wins and have more horses.

He doesn’t need to be reminded that those wins might not come when they’re anticipated.

Despite his relatively new status in standardbred horse racing, Stillwell has learned that he expects the unexpected whenever his horse lines up behind the gate.

Every time he experiences that sense of accomplishment, he sports a familiar family look, especially the riding and training colors he proudly wears.

“My colors are the ones my family has always had, red, white and green. They were my grandfather’s colors and I thought when I got mine I would stick with them. He kicked off tradition in racing and I wanted to carry on that tradition, it’s very important to me.

Whenever he has time to take a break from the demands of racing, Stillwell can often be found hanging out with his racing cousins, Vinnie and Rob Ginsburg.

“I like to relax and play video games with my cousins. But we always end up talking about races and horses.

And that’s fine with Stillwell.

After all, being around the racetrack is wherever it wants to be.

“I like to see when my hard work pays off. When someone who trains wins, it’s a great feeling to know that all that hard work has resulted in a win. With driving, if I’m doing the right picks and we win, it shows me that my hard work to become a better rider has paid off, it’s rewarding to improve and achieve victory because of the hours you put in.